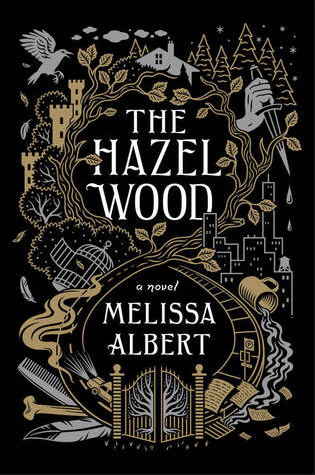 The Hazel Wood by Melissa Albert is a fantasy novel set in today’s world. It centers around fairy tales, just not the ones you’re familiar with—these are the fairytales of nightmares. Met Alice Proserpine, and her mother, Ella. Alice has had a very nomadic childhood and it soon comes apparent to her that they are running from something. Or someone. But Alice, not wanting to upset her mom, allows herself to be dragged all over the country. She doesn’t ask about Althea Proserpine. She doesn’t ask about how her grandmother’s fan sometimes mob her or speak about the red-haired man that promised to take her to her grandmother when she was young. Most importantly, she doesn’t ask about Tales from Hinterland—her grandmother’s famous book that has only a few copies left.

The Proserpines are doing well until Ella decides finally settle down and marry. After the marriage, Alice returns home one day to find her mother gone and her stepfather upset. Then she mets Ellery Finch. On a quest to find who had taken her mother, Alice tries to find the place that Ella has repeatedly warned her against. Her grandmother’s mansion, the Hazel Wood.

Generally speaking, this book was a good read. All of the characters were well developed—Alice and her anger issues, Finch and his obsession, Ella and her secrets. Each character wasn’t just some name mentioned on a page. They were all working towards their own goal, which tied nicely in the conflict and plot of the story. Albert particularly did well demonstrating why Alice wanted to find her grandmother and why she stopped when she was young. As a small girl, Alice would often dream about finding her grandmother and finding the Hazel Wood, even running away once to find it. This, understandably, makes her mother Ella upset. Once young Alice sees how upset she is, she (mostly) stops her quest to find the Hazel Wood. I felt like this was very important in developing Alice. Even though she wanted to badly find her grandmother, her love and respect for Ella stops her. Because of this, it isn’t hard for the reader to understand why her mother goes missing, Alice drops everything and searches for her. So there was some good character develop. It was easy to understand why the characters were making the decisions they were making.

And you have to give this book points for originality. The word original probably doesn’t come to your mind when you think about fairytales, but these aren’t the fairy tales you’re used to. They’re dark and they’re scary—like if Stephen King wrote fairy tales. If Twice-Killed Katherine was real, I would be living in a bunker in Montana. I would never look at birds the same way again. These are a set of refreshingly new fairy tales that add to the story. The first time you heard Little Red Riding Hood, you probably were wondering what the wolf was up to. By the second telling, the story has lost all of its suspense since you know what’s going to happen. Not with this book.

However, I thought that the ending of this book was weird. Quite obviously, they find fairyland—or, cough cough, Hinterland. And then everything goes horribly wrong. Through this, the strange world of Hinterland is revealed and some important things happen in one big finale-like event. This event felt misplaced in the book’s structure because it felt like the climax, except it wasn’t. The book wasn’t done. So then it dragged on—except it didn’t really “drag” since I was still interested—and a huge amount of time passes after it. Should have ended the book at that almost climax, right? So the story continues, the climax finally happens, followed by a resolution. Despite the almost climax, this isn’t what really bothers me about the ending. The part that bothers me is that Alice and Finch, who have been journeying together this whole time, part ways at the end. To me as a reader, this didn’t make sense. They had been through a lot together and Finch had sacrificed a lot to find Alice. Why the sudden part of ways? They each had a reason for parting ways but still. The budding rose of romance just got stepped on. But there’s a sequel. So it’ll be all okay.

All in all, a terrific read. It had well developed characters whose decisions actually made sense and gets points for originality. The dark fairy tales were refreshingly new and unique—on second thought, let’s call them “horror fairy tales.” Seriously. Avoid ice and birds. And even though its weird ending lost it a star, it’s was still worth reading. Now let’s read the sequel.

Other books in this series (unconfirmed as of June 2018):

If you want a picture to show with your comment, go get a gravatar.