Prepare for a new dystopian adventure you won't be able to put down from Neal Shusterman. 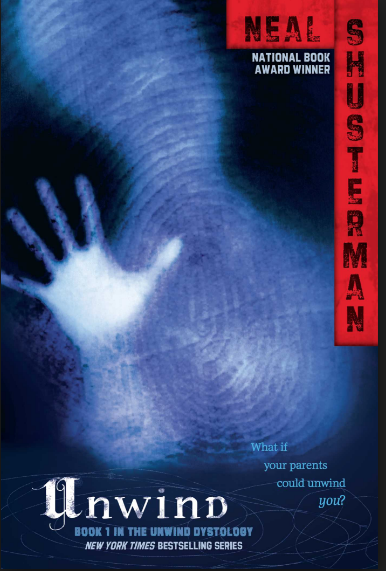 Unwind is a dystopian novel that takes place in post Second Civil War America centering around three main characters: Connor Lassiter, Risa Ward, and Levi “Lev” Jedediah Calder. Despite this America being a fairly civil place, Connor, Risa, and Lev are all in danger. And that’s because they are between the ages 13 to 18 years old; they are in danger of being unwound. This book follows their journey as they escape their fates, avoid Juvey-cops, discover an underground, and question whether unwinding is morally right.

In the end, this book was suspenseful, interesting, and, quite frankly, scary. The Second Civil War in this story was fought over a familiar and controversial topic: abortion. The conflict centers around a fictional Bill of Life that was proposed to end this civil war that satisfied both pro-life and pro-choice individuals. The solution in the Bill of Life? Unwinding. In this world, there is no abortion and children are protected when they are conceived. Or that is until they turn 13. Once in the 13 to 18 range age, parents can choose to sign an unwind order. Kids are then taken to a harvest camp—and what happens there, no one knows. But they are never seen again. Well, actually, they could be seen again. Except it would only be a part of them. Because of this, this book isn’t scary as in horror-scary, but frightening in what is right and what is wrong. You see, unwinding is a socially accepted practice in this society. No one sees it as wrong; in Lev’s case, some kids even happily accept their unwinding. However, to the reader, this is seen as murder because it is. They are taking teenagers never to be seen again. The reader has to ask themself How did this get this way? More importantly, How can anyone see this as morally right? Shusterman perfectly crafts this story around what it means to be human and frighteningly challenges the morals of humans. Because just how do we know when we are “right”?

As mentioned before, this book is also suspenseful. After some beginning conflict, the three main characters are on the run from the police. They are constantly watching their backs and they have to take drastic measures if there are found. More so, there are also some characters that the reader doesn’t know if they can trust. For example, Does the Admiral really want to help runaway kids or is he just collecting parts? The reader is sucked in and keeps turning the pages.

The characters are unique, the idea is new, and the conflict is somewhat real. Personally, I thought that this book was outstanding. Not only was it immersive, it made me question how “right” humans are. And how people on the other side of that “right” feel. Because of that, I gave it all 5 stars. Besides unwinding, this book had other emotional circumstances that support this question of “right”. For instance, a certain dead baby passed between snotty neighbors. A father who impossibly wants his son back. An injustice done to a young man whose parents only wanted the best for him. And an arm with a tattoo. In other words: it’s scary.

Overall, Neal Shusterman’s Unwind is a fantastic dystopian fiction novel that questions human morals. Not only does it take the reader on an adventure of a lifetime through three main characters, it challenges disturbing “this is right” social norms. With strong originality, this book is one for your shelf.

If you want a picture to show with your comment, go get a gravatar.