Monument 14 by Emmy Laybourne: Perfect for a Lazy Day 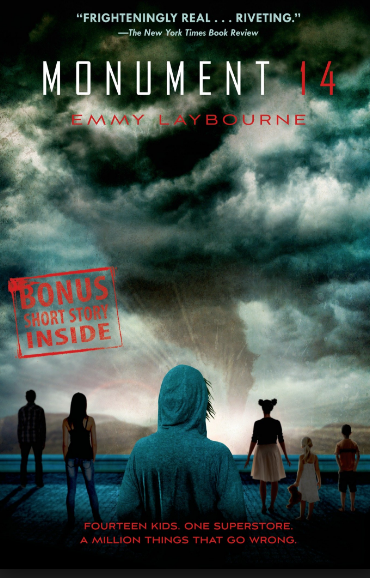 Monument 14 is a suspense novel centered around the lives of 14 children and teenagers living in Monument, Colo. The main character, Dean, is on his way to school when abnormally sized hail crashes his bus, stranding him and his classmates at a Greenway store. There, the children must work together to survive natural disasters stemming from one tremendous volcanic eruption.

Overall, this book is very fast-paced and there is plenty of action: the reader is thrust into the world with little character or setting development, which instead occurs over the course of the novel. That said, the plot follows predictable patterns, providing an easy read.  At one point, a chemical is released into the atmosphere, affecting characters differently based off of blood type. The symptoms provide lazy conflicts for the characters; for example, type O blood carriers become violent—conveniently this is the most common type. For the most part, the storyline is not very thought-provoking; however, it is compelling. Readers certainly won’t be bored reading this.

The characters are typical for YA fiction. They lack depth, especially the main character. Dean’s main concern throughout the book is his crush, Astrid, the smart, athletic, and beautiful popular girl: an overused cliché. Instead of thinking about his family during this time of crisis, Dean becomes obsessed with Astrid. His fellow classmates are also basic. There’s Jake, the jock, Brandon, the bully, Nico, the resourceful Mr. Fix-It, and Josie, the mother. On top of that, there is an eighth grader, Sahalia, whose only character trait is that she is an attention-seeking kid who wears revealing outfits. The female characters in this book are submissive, doing what they’re told by their male peers and take on motherly roles. Not even the elementary-aged children are given more than one trait, barely making an impact on the storyline other than to cause a small inconvenience for the main characters. Altogether, while the characters may clash with each other to provide Lord of the Flies-style conflicts, they won’t be remembered long after the book is finished.

All in all, this book is unoriginal. However, despite its faults, Monument 14 hooks the reader by the fifth page and takes them down a path of suspense and betrayal. The ending leaves the reader on a cliffhanger, and definitely gets them interested in reading the sequel, Sky on Fire. Not much can be said for the book’s intellectual qualities, but it is a great way to spend a boring afternoon at home.